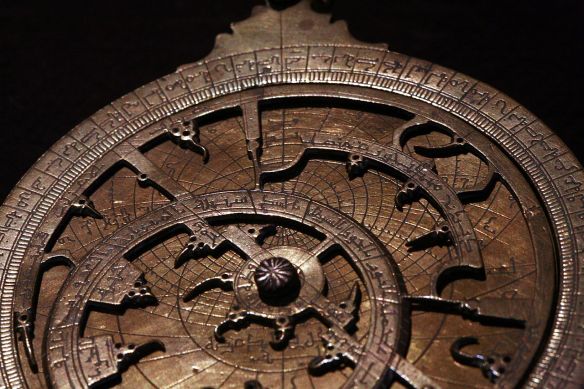 Whether you’re an astronomer, astrologer or steampunk fan, you’re bound to fall in love with this ancient analog computer.  Even better, you can make one for yourself by downloading the directions from the Resources section below.

The astrolabe is an ingenius device used for nearly two thousands years, from the time of Hipparchus (c. 190 – 120 BCE) until the turn of the 17th century.  It’s typically a disc constructed from wood or brass, about 10 – 20 centimeters in diameter, and a few millimeters thick.  In 1391, medieval writer and poet, Geoffrey Chaucer, wrote a treatise on the subject for his son, describing how to build one as well as its use.  Astrolabes had over a thousand uses, including timekeeping, navigation, surveying, solving equations, and so forth.  Mastering them all required an entire university level course.

While at first appearance an astrolabe is intimidating, breaking it down into its components, combined with the information contained on each one, brings a strong sense of familiarity if you’re an astronomer.  Appreciation for the knowledge ancient civilizations acquired of the stars and their relationship to the Earth quickly follows at the thought of designing, much less crafting, such a clever precision instrument.

The main components of a planetspheric astrolabe are the mater, climate plate or tympan, and rete, which all function together, demonstrating how Earth’s place in the cosmos provides the ultimate reference frame. 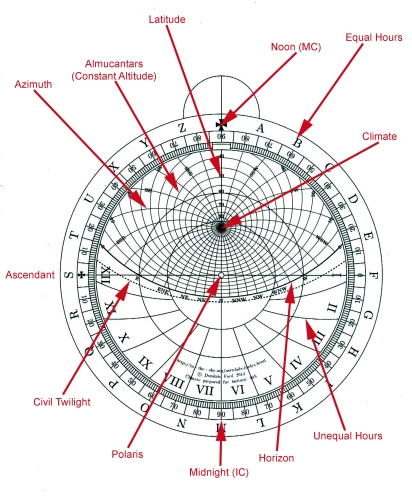 The front of the astrolabe, called the mater, (which means mother and is sometimes referred to as such) looks mind-boggling, until you break it down into its components.

Starting from the outside, you see most of the letters of the alphabet around the circumference.  These represent the twenty-four hours of the day, more specifically, the equal hours system, which is what we use now, i.e. each hour is 60 minutes long.  However, at one time, there were twelve hours of daylight and twelve hours of darkness.  Needless to say, unless you live on the equator, the days and nights are NOT of equal length except at the equinoxes.  Thus, the unequal hours system meant that the duration of hours were adjusted, according to the time of year.  The astrolabe thus accounted for them as well, as shown by the designated lines in Figure 1.

The numbers just inside the letters represent degrees from the horizon, where’s it’s zero, to a maximum of 90 degrees at the zenith (Noon) or nadir (Midnight).

The horizon is represented by an oblique line. Unlike most of the maps we see these days, East is on the left, West on the right, North at the top, South at the bottom. ( If you’re familiar with astrology, you should not be surprised that these are the same as a horoscope with the ascendant on the left, Midheaven (Noon) on the top, descendant on the right and Imum Coeli (Midnight) on the bottom.) Just below the horizon is a dotted one, which is somewhat difficult to see at this scale, but represents the period known as Civil Twilight, or the time in the morning or evening when the Sun isn’t above the horzon, yet there’s a certain level of light.

So, to recap, so far we have 24 hours around the outer edge, perpendicular lines representing the cardinal directions, and an arc indicating the horizon.

Due North, represented so conveniently by Polaris, a.k.a. the North Star, is located dead-center.  Its position in the sky varies with latitude, indicated numerically on the vertical line extending upward from the climate’s center.

The climate, sometimes referred to as the tympan, comprises the section that looks like a spider web with a center just North of Polaris, which represents the zenith, or portion of sky directly overhead. The curved lines mark azimuth readings, while the concentric rings are lines of constant altitude or almucantars. These vary with latitude, like the view of the night sky, so astrolabes used in multiple locations required suitable climate plates, which fit into this area. Note the degree markings along the edge of the azimuth lines, which you’ll use later.

A rotating ruler with degree markings which represent declination, the altitude above the celestial equator, is attached to the center of the mater. It’s also used as a convenient pointer in the process of telling time, as explained further below. [NOTE:–The concentric rings, which are unlabeled in Figure 1, are duplicated on the rete and therefore explained in that section as well as defined in Figure 3.] 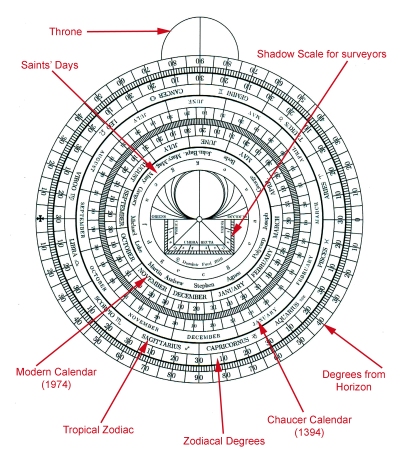 The back of the astrolabe is equally daunting at first sight, until you break it down. However, it’s this complexity that allowed this ancient instrument to provide so many functions. For example, the box labeled “Shadow Scale for surveyors” gives a hint of one of its many uses.

The top, called the throne, was used to hang the instrument or hold it in the proper position.

The outer ring has degrees from the horizon, like the front, with zero on the horizontal axis and 90 degrees on the vertical. Just inside the degrees are another ring of numbers, this time corresponding to the degrees of the tropical zodiac signs named in the next ring.

There are two calendars represented, one from Geoffrey Chaucer’s time (1394), which is included since Chaucer wrote a popular treatise on the astrolabe for his son, a copy of which you can find online. The modern calendar, closer in toward the center, is based on 1974, but this is close enough since it takes centuries for precession to change enough to worry about.

Near the center, several Saints’ Days are noted.

Thus, there’s a lot of information, but most of it’s familiar. Another pointing device called the alidade is placed on the back, which is similar to the ruler on the front except it has either pinholes or notches used to sight in the altitude of the chosen star or landmark, if being used for surveying. 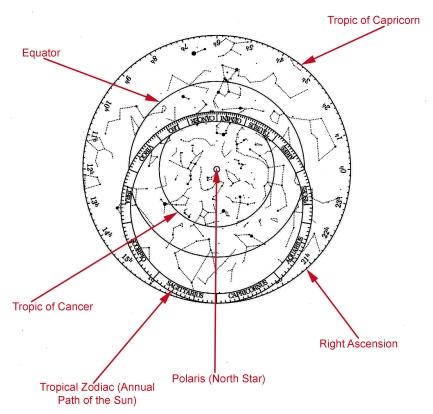 The rete comprises the main component of a planisphere, i.e., a stereographic projection of the celestial sphere on a flat surface. Polaris is at the center with several constellations included with the brighter stars emphasized.

The outer ring represents the Tropic of Capricorn, the one in the center, the Equator, and the innermost ring, the Tropic of Cancer. The hours of Right Ascension are shown along the circumference as well.

A diagram of the annual path of the Sun, a.k.a. ecliptic, is offset from the center and includes markings for the signs and degrees of the tropical zodiac.

For a homemade astrolabe, the rete is printed on a sheet of clear transparency which allows the stars to be superimposed on the mater. Obviously, in ancient times, that wasn’t available, their solution not only innovative but artistic as well. The rete, like most of the other components, would be constructed of brass, but numerous areas cut away so you could see the mater underneath.

Most astrolabes were carefully crafted precision instruments which were much larger than the homemade version, allowing for a more accurate position determination, but nonetheless, a relatively accurate reading is possible with a homemade version, a source of which is included in the resource listing.  The ancient Turkish astrolabe in Figure 5 shows the mater and rete on the front and calendar and alidade on the back.  Note the incredible artistry and workmanship of this 17th Century device. 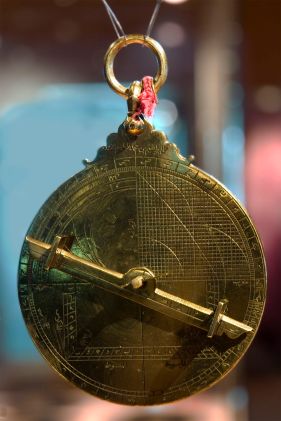 To determine the position of a planet, use its relationship to the Fixed Stars on the rete.  By rotating the rete so that the position of the planet is on the horizontal axis, i.e., zero degrees, then following that line to the tropical zodiac on the ecliptic circle, to determine its position. The ruler provides its declination.

This process is relatively simple and shows the genius of using Earth’s position combined with celestial alignments to determine the time of day.

If you know any two of the variables (date, time, rete star position), you can always solve for the third.

The innovative talents of the ancients who invented this device provide a new appreciation for their knowledge of the heavens, Earth, and their celestial relationships.

Even more astounding, and perhaps even a progenitor or technological cousin of the astrolabe, is the antikythera mechanism, an invention attributed by researchers to Aristotle.  It included the positions of the Moon and planets using a complex system of gears and pins that compensated for their elliptical orbits, plus had the ability to predict when eclipses would occur.  Researchers believe it was lost when General Marcellus sacked Syracuse, then surfaced later via the Byzantine Empire (500 A.D.) where it was most likely the inspiration for Persian astrologers to reinvent the astrolabe, then bring it to Spain in the 13th century via the Moors.

During the 14th century Renaissance, sophisticated gear trains came back to drive astronomical clocks found in various European cities such as Strasbourg, France and Prague, Czech Republic.  The sophistication of these devices demonstrates the knowledge of celestial mechanics and engineering possessed by past civilizations, tangible testimonials to man’s ingenuity, long before such calculations became the domain of application programmers creating smartphone apps.

Directions for Making an Astrolabe

Some Places to Buy Astrolabes

Video on How to Use an Astrolabe