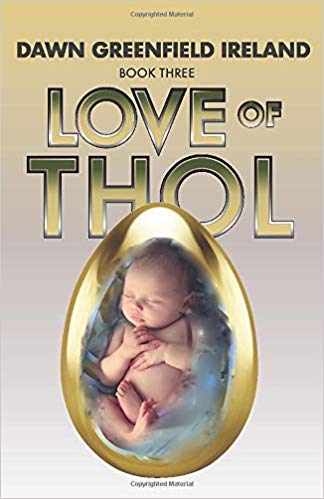 This enchanting series is a perfect example of the somewhat obscure genre known as Sci-Fa, i.e. a combination of science fiction and fantasy. The author has created a vivid world accessible through various portals on Earth. In volume one, “The Prophecy of Thol”, teenager, D’laine Jackson, accidentally tumbles through this portal where she is received as the fulfillment of a prophecy. As she adapts to her new world in which she will play a key part, there is never a dull moment.

As the series progresses through volume two, “Gifts from Thol,” her family and others join her. Each person from Earth discovers they have a special gift in this new world. These include such things as the ability to achieve local teleportation, seeing the future, and communicating with animals. In this volume, another family joins them, their gifts unique as well.

The characters are engaging, individual, and interesting. The imagery is outstanding. I can truly visualize the settings and various characters. One note in that regard, in the back of this book there’s a reference guide to the various terms used as well as brief descriptions of the creatures and positions of the characters. It would be helpful to look that over first. When such are introduced in the previous volumes they are beautifully described. However, if it’s been a while since you read them (which you should, in order, to grasp the full genius of this series) it’s an excellent refresher if your memory is like mine and isn’t always as reliable as you’d like it to be.

The story and characters continue to grow and progress in this volume. D’laine and her husband, Trakon, are now expectant parents. The birthing process on Thol is significantly different than Earth. It appears that D’laine has adapted to their physiology in this regard, though there are various hints that things are about to change. Other civilizations and cultures are introduced, including some intriguing hooks regarding the prophecy that D’laine represents. A horrific storm called a churling that’s comparable to a hurricane on steroids falls upon them, bringing new challenges.

The plot flows easily, as if you’re right there with the characters, and is rich with a strong feel for daily life on Thol, yet new intrigue is skillfully woven in. Fans of this series will be happy to know that there is more to come as new mysteries are introduced, which would be spoilers to specify.

I highly recommend this series. While it’s intended for teens and young adults, its characters and plot are a pleasurable read for any age, from those children to whom it could be read aloud to grandparents like myself, who thoroughly enjoys my escape into this new world. It would make a terrific gift for young readers. Pick up your copy on Amazon here.

This five-star beauty of a story is so well done I hardly know where to start. First of all, while it is definitely suitable for teens and young adults based on its content, as someone who has grandkids in that age group I thoroughly enjoyed it, too. More than enjoyed, actually. I loved it!

The author did a fabulous job of transitioning the heroine, seventeen year old D’Laine, from what had been a very trying time, to some semblance of normalcy as she prepared to go to college, to being plunged unexpectedly into an entirely different world.  Her premonitions in the form of nightmares provided great background and suspense. In most cases, giving the reader more information instead of less actually builds more suspense as you have so many more things to consider and worry about. Not only did D’Laine fall through a portal and find herself on another planet with a variety of weird creatures, she also was introduced to powers she possessed of which she had no idea! Her transition into the role effectively took the reader along for the ride in a very smooth and credible manner.

The unusual sentient creatures and their respective cultures were well-drawn, full of imagery, and convincing, as well as their interactions among themselves and the planet as a whole. The humans were just alien enough, being somewhat medieval in some senses, yet high-tech on another, making them relatable.

The advantage of having a modern earthling as a protagonist is that the descriptions can be familiar. Some of the comparison and references to sci-fi icons such as the Star Wars movies were effective and often humorous.  The science element was convincing as well, the physicists involved straight out of “The Big Bang Theory.” I loved the characters left behind on Earth and their efforts to find the portal so they could bring back D’Laine. On a subjective level, I thoroughly enjoyed the fact they were in Houston, where I used to live. Thus, I enjoyed the references to familiar places including the Katy Mills Mall and local roadways. It’s always a plus when the location details are authentic, which adds credibility. Those who have never been there never know the difference, but to those who have it makes the story come even more alive.

I’ll even forgive the fact the story broke one of my cardinal rules of writing, (which I posted today in my “Writing Tips”) about starting a story with the main character. I can forgive any deviance that works, in this case giving it a story-telling flavor similar to “The Princess Bride.” (However, if I had been the editor, I would have recommended using a prologue.)

For a while I was worried that the story would end with a cliff hanger. Fortunately, it had a very satisfying conclusion, yet I definitely look forward to the promised sequel, which is the perfect ending. This is a great story for all ages. Don’t miss it!

If you’re subscribed to Kindle Unlimited, you can read this jewel for free, or pick up your copy on Amazon here. An audio version is also available.