Now we’re getting to the good stuff and I hope you can see why I gave you all that background information leading up to it. In order to fully appreciate something, whether it’s good music or literature, you need a foundation, no matter how rudimentary it may be. And believe me, it was, even though your eyes may have glazed over. My previous posts were a whirlwind tour of physics for dummies but you are now much better informed than most people out there, assuming you read it. Congratulate yourself! I will try to reward your efforts by building on that information so that anyone who skipped it will be entirely lost and need to go back and suffer through it like the rest of you.

Quantum theory was mind-blowing because it introduced the possibility that an observer could influence how light and even matter behaved. This, of course, was only proven on a very small scale, yet the influence was there. Suddenly the world of physics and metaphysics were starting to overlap.

One of my heroes in the physics world is Richard Feinman because he demonstrated an interest in so many things besides physics. I believe he was as brilliant as he was to the point of winning a Nobel Prize was because he was so open-minded and had the courage to see things differently. That is how breakthroughs come about.  I’ll be forever grateful to him for his “Lectures on Physics” which helped tremendously when the textbooks fell short.

Another great physicist who seemed to grok the concept that there was more to life than one’s own very specific discipline was Werner Heisenberg, also a Nobel Prize winning physicist with an actual phenomena named after him that relates to quantum theory, i.e. the Heisenberg Uncertainty Principle. He stated, “It is probably true quite generally that in the history of human thinking the most fruitful developments frequently take place at those points where two different lines of thought meet. These lines may have their roots in quite different parts of human cultures, in different times or different cultural environments or different religious traditions: hence if they actually meet, that is, if they are at least so much related to each other that a real interaction can take place, then one may hope that new and interesting developments may follow.” 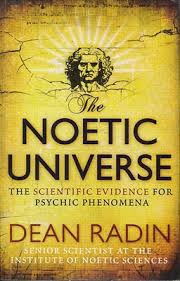 Hello? Ya think that maybe quantum theory would be a good one for collaboration with other disciplines? Scientists need to talk to one another! Here we have physicists scratching their heads over whether consciousness and matter interact while we have psychologists such as Dean Radin researching psi phenomena which may well be the mechanism that causes that interaction between consciousness and matter. Rather than treating these researchers with about the same respect at Dr. Venkman (played by Bill Murray) in Ghostbusters, maybe they should get together over a pitcher of margaritas and see what they come up with.

Quantum entanglement is the term used to describe two particles which become tied up with each other enough, kind of like atomic soulmates, that even when they are separated by long distances, if something happens to change the state of one, the other reacts also. This happens instantaneously, i.e. the communication occurs faster than the speed of light, a barrier that was never supposed to be breached. Psi is also instantaneous. Does this imply that we become entangled with others at the quantum level? This is especially enticing when you think of the stories of identical twins who originated with the same genetic material and are also connected at the psychic level.

Along similar lines is the concept known as NLP or neuro-linguistic programming. It has also been called “the power of positive thinking,” and described in a movie called “The Secret” and promoted by a plethora of motivational speakers who declare that you can create your future by visualizing what you want on an consistent basis such that you will eventually draw that situation to you from the Universe at large. If psi has the power to manipulate matter and create not only matter but circumstances, doesn’t that sound as if it has something to do with quantum theory?

Weird, you bet. But it works. We can, indeed, draw circumstances to us in this manner. Which bring me to favorite quote of mine from science fiction author, Arthur C. Clarke: “Technology sufficiently far advanced is indistinguishable from magic.” What would Isaac Newton think of your smartphone?

However, there was one rather large problem that comes down to one, little three-letter word: EGO.

Scientists tend to have tunnel vision when it comes to their own field of study. I remember hearing once that as a person comes closer to a PhD that their IQ actually goes down. This does not mean that they are losing brain cells from overwork and losing intelligence. The typical IQ test assesses how much a person knows about a broad spectrum of knowledge and as a person narrows their interests down to the level required to pursue a PhD they get in the realm where they know a lot about a little which actually jeopardizes their IQ. This also means that they start blocking out anything that doesn’t relate to their chosen subject. They can become arrogant as they become experts and sabotage their colleagues who are seen as competitors for needed research funding. There is also the status issue. If you’re proven wrong you are probably through. After all that work getting to that pinnacle, the last thing you want is some upstart to push you off.

Breaching this obstacle is likely to require what has been described as “progress by funerals.” In other words, as the old farts die off and those new upstarts take over, things will move along much faster.

At least until the upstarts scale that pinnacle and replicate the cycle.