My lot is on the corner, which has a few advantages. For example, I have a back gate that works well for the propane truck or when I want to unload something directly into my shed. If I ever wanted to build another house or sell it as a building lot, there’s no problem with road access. It also makes my little piece of Texas look bigger, though sometimes that can be intimidating.

Not so advantageous is having a dirt road skirt half your lot’s perimeter. That means dust kicked up by every passing vehicle, particularly garbage trucks and all those massive pickups that are so popular here in Texas. Furthermore, they all tend to cut the corner, such that over the years the encroachment resulted in the corner of my lot actually being in the middle of what has now become the road. Obviously, the beneficiaries are my neighbors, across the street, where the road’s supposed to be.

Most of this happened before I owned the place, but when I saw the land survey I decided that was crazy and it wasn’t going to continue on my watch. First step was a chainlink fence. No, we didn’t take it all the way to the middle of the road, but we definitely pushed it out there enough to send a message.

To top it off, my favorite contractor gathered some rocks, which are plentiful in this area, so I could build a rock garden, but it wasn’t until this spring that I finally got around to doing so. Until a week or so ago, the rocks were overgrown with weeds. Not anymore! I’m happy to report that 500 lbs of dirt and a fair amount of sweat later, that my message to encroachers is complete. It’s populated with a desperado sage, golden sword yucca and mountain laurel, all of which will grow to be 5 – 10 feet tall, can tolerate winter temperatures down in the teens as well as summer heat and droughts. And a few vincas for color, of course.  My rational in using native plants was that once they’re established they’ll do fine on their own so I don’t have to drag a hundred foot hose down there to water them.

Of course building a rock garden can easily be associated with another situation, when people encroach upon your personal space. In that case, the solution is much the same. Building a stone wall and setting boundaries are your best bet, but it doesn’t have to be ugly. Sometimes it may have to be, but in most cases setting the boundaries, albeit doing so with a smile and kind but assertive words, will cause less resistance. I shudder to think what my neighbors would have done had I placed my fence, much less my little rock garden, out in the middle of the road, even though my lot reaches that far legally. The main point is to defend your right to privacy and what is yours.

Remember, what you allow will continue.

This morning I went outside and found a massive array of holes around the base of my biggest oak tree. The last time I saw such a mess was a few years ago in which case the perpetrators were a bunch of wild hogs. Now I have a chainlink fence, far too high for hogs to scale, and all the gates were closed. So, the only logical conclusion was that it was a massive party held by armadillos rooting for whatever it is they eat. There must be a couple dozen holes with several a foot deep! In some cases, rocks the size of baseballs had been removed! Needless to say, I’ll need to fill them in before the next time I mow.

It’s still unimaginable that dillos made such a mess, compared to the usual holes I find that are about an inch or two in diameter and about that deep.  Maybe this was courtesy of ET.  Wish I had the event on video. Either way, it would have been tremendously entertaining!

My poor iris took a beating during the drought the past few years while the cactus survived, then got entirely out of control with this year’s welcome rain. The iris perked up, too, and deserved a new home, which they now have next to my shed.  I also have a garbage can full of cactus ears that probably weighs 300 lbs. 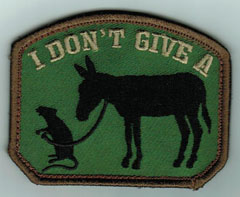 I’m sure that most of you out there can relate to the picture to the right as far as my efforts to tame my little piece of Texas are concerned. That’s okay. There’s something satisfying about sharing my progress in cyberspace. Somehow it provides a certain level of accountability, too. Just in case ANYONE actually does care, my intent is documented and it will be harder for me to give up and quit, though it’s pretty likely that will happen as the mercury rises into the usual triple digits of a Texas Hill Country summer. Until then, I can at least get as much done as I can, whether or not anyone notices, much less gives a rat’s ass.