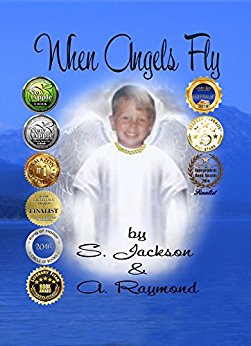 I’m heartbroken as well as outraged that someone had to have such a horrendous experience as the one chronicled in this story. The strength and maturity the author displayed while going through the heart-rending experience of being there for her five year old son while he battled cancer is truly a testimonial to a mother’s love, especially someone who had been abused herself, but had the fortitude to break that cycle.

It’s not like this mom had the support of her family during this trying time. To the contrary, she had an abusive, sociopathic husband and a mother who was to say the least, a psycho bitch from hell, both of whom did everything in their power to make Sarah’s life as miserable as possible. Neither cared about the poor child, but simply wanted to cause as much misery as possible. It’s amazing to me that the courts failed to stop these horrible individuals from harassing this poor woman as well as a child who was gravely ill. It really calls into question both the parental rights of sperm donors as well as grandparents who don’t deserve the time of day, much less inclusion in their grandchildren’s lives. With all the documented abuse, it’s outrageous the courts didn’t protect them. Her abusive husband, whom she was trying to divorce, had over 20 DUIs, yet he was allowed to have access to her and the children! Why wasn’t this worthless SOB in jail????

And then there is the medical side of this nightmare. First of all, incompetent doctors failed to diagnose the illness in the early stages, when perhaps it could have been treated successfully. Then when the poor little guy was hospitalized, it was amazing how many mistakes were made, or could have been, had his mother not been there, keeping an eye on everything.

What follows is technically a spoiler, but all you have to do is ponder the title or look at the cover to know that this story does not end well. In fact, the final mistake that ultimately cost the child’s life was due to a bad decision by a therapist that was carried out in spite of the mother’s protests. The autopsy showed no cancer remained in his little body, his death ultimately caused by the treatments he’d received. What’s the matter with these people who can inflict poisonous therapies on innocent children to the point of death and call it healthcare? Most of it is little more than experimentation, and certainly no better than some of the things the Nazis did during WWII. Okay, this story took place in the 90s and some things have improved, but not much.

While many people in the healthcare industry are caring and competent, and they do save lives, too often patients are seen as no more than another piece of meat or a cash cow. To be fair, I’ll admit that I’d probably be dead today except for having had cancer surgery twice in 1993 and 2008, and a stiff round of antibiotics for bacterial pneumonia in November 2017. Nonetheless,  I’ve had enough negative experiences myself with the medical profession that I am for the most part skeptical and wary when that prescription pad comes out or chemo is mentioned. It’s no secret that healthcare in the USA is not about making people well, but making money, particularly for Big Pharma, who virtually runs the FDA. Other cures exist for cancer–not just one, but many–which are suppressed by the powers that be because they are natural and can’t be patented. Seriously. What’s wrong with this picture?

When I think of that poor, innocent child  going through medical procedures that amounted to legalized torture, to say nothing of his mother having to witness it, I don’t know whether to cry or scream. The casual attitude toward x-rays and CT scans with no regard to the harm caused by exposing a child to repeated radiation is appalling. I’ve been through a round of chemo and it was pure hell. When I think of a child being subjected to that, plus the radiation treatments, my heart aches, especially when it’s possible that other, gentler treatments exist, yet are illegal because they could threaten the income of the pharmaceutical industry. In what universe is that morally okay?

And then there’s the matter that so many children from the surrounding area had come down with cancer. What was going on in the environment for that to happen? Why are so many children coming down with cancer everywhere these days? This reminds me of the fight Erin Brockovich took on against Pacific Gas and Electric, who were polluting the water supply hexavalent chromium and caused a similar outbreak of cancer in a small California town decades ago.  And then there’s the matter of our insecticide and herbicide tainted food supply to say nothing of matters such as Monsanto, GMOs, and so forth, all jeopardizing our health, while the government tells us it’s okay.

There is something fundamentally wrong with a society that allows such things to happen. The fact that this mother was able to get through this heartbreaking experience without being bitter toward those who failed her so miserably shows what a good and caring person she is.  I am furious that so many let her down, from the court system to the medical profession, and even the government, and that her story, decades later, is not that unique. While her love and dedication to her child is definitely inspiring, a system that exacerbates the pain of such a situation rather than relieve it is nothing short of criminal.

2 thoughts on “A Raw, Heart-rending Account of a Mother’s Love”