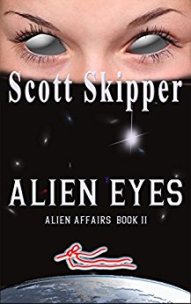 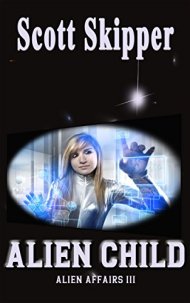 I read the first book in this series, “Alien Affairs”, a few years ago and always intended to read the others, but had a TBR list that precluded it at the time.  When a health issue drove me toward reading something that would make me laugh (laughter is the best medicine after all, right?), I reread “Alien Affairs”, then immediately dove into the sequels. I was not disappointed.

As a fan of dry, dark humor, not only did this one make me laugh, it was also a great, highly suspenseful story with a complex plot of its own with some new engaging characters. With the human race left sterile by the attack depicted in book one, now the characters need to figure out how to reverse the effects. Coupled with that, however, is a wave of terrorist attacks, which rather than simply using explosives to kill people, disperse the deadly ebola virus instead. Thus, the chase is on, the team trying to second guess the terrorists with regard to where they’ll strike next while also trying to develop the antivirus to say nothing of trying to live their personal lives in the midst of chaos.

Alien technology recorded in an ereader that main character, Carrie Player, obtained in book one, contains the information they need to beat the virus, which they hope to employ to reverse the sterility situation as well, since it’s caused by a virus. Nothing is simple, though, because the aliens are still hanging around committing random abductions to make sure their extermination plan has succeeded. If they discover their mission to wipe us out humanely by attrition has failed, they’ll simply kill off everyone real-time with their gravity wave weapons, though we’re on the trail to developing them as well, thanks to the same ereader.

Anyone who has left-leaning political views would probably find this book outrageously offensive.  I found it refreshing and satisfying, the characters’ goals such that could undoubtedly improve upon the current world situation. There’s no sugar coating of what’s going on or where we’re heading, if someone doesn’t take drastic steps soon. While I appreciate the symbolism vampires and zombies represent in numerous dystopia novels, this cautionary tale doesn’t pull any punches with regard to where the greatest threat really lies. These stories are not trivialized satire; they are well-written, masterfully constructed, brilliant looks at how our way of life is crumbling before our eyes. Read it and weep.

If you haven’t read “Alien Affairs” this book would still make sense since the author did an outstanding job of recapping major events that tie into this one. However, I recommend starting with book one since it sets the stage by going all the way back to the Roswell UFO crash back in 1947. If you’re a UFO or conspiracy aficionado, you’re bound to thoroughly enjoy these well-written, fast-moving stories populated with vivid, often snarky characters you’re sure to cheer on in their quest to save the world from annihilation.

Pick up your copy of Book 2 on Amazon here.

Moving on to Book 3, “Alien Child”, the third and final book in the “Alien Affairs” series, this one is slightly different since it’s written through the viewpoint of Terrie Deshler, who is Carrie Player’s child (born in the end of book two as the result of an alien encounter in book one) who has 2% alien DNA.  Now a teenager, she’s brilliant, snarky, sexy, and telepathic, her black eyes the only visible evidence of her alien heritage. This is enough for her to be viewed as an abomination, so she and her mother become the target of government supported terrorist attacks. Thus, they are forced to live in a walled compound surrounded by heavily armed security details.

Having found an anti-virus which can reverse the sterility imposed upon the world in book one, it is being selectively dispersed only to graduates of Georgia Turnbull’s elite Academy, their goal to repopulate the earth with educated, hard-working, morally solid individuals. Controversial, yes, but what intelligent person hasn’t entertained the thought that there are some people on this planet who simply shouldn’t be allowed to reproduce? Yet, there is the matter of who should make such a radical decision? It’s even more complicated, however, because if the aliens discover their plan to destroy the entire human race has failed, they’ll employ more violent means to do so and be done with it.

Like the other books in this series, this one is loaded with political incorrectness. However, anyone who thinks we’ve made strides forward in the past several years is either blind or can’t be playing with a full deck. It’s thought-provoking to consider who the real enemy is: The aliens who want to destroy the human race because they don’t want our propensity for violence unleashed on the entire galaxy? Or the terrorists and their sympathizers in the government itself, who are clearly on the path to destroying civilization as we know it?

Yet, when push comes to shove, the aliens turn out to be Carrie and Terrie’s allies, providing some very satisfying, high-five moments, though the problem remains regarding the alien’s refusal to accept a failed mission due to the sterility issue. There are certainly plenty of other loose ends that the author could continue to develop, should he so choose to continue the series.

I blew through this book in a single day, wondering how it would end, which certainly held some interesting twists and surprises.  Dark, satirical humor and suspense aside, this thought-provoking series addresses numerous sobering issues. Clearly we live in a world that has chosen a path that can’t possibly end well without intervention. It wasn’t too difficult to see both the alien point of view as well as that of the Turnbull Academy with regard to human behavior. As a side note, if you’ve read any of Dr. Steven M. Greer’s books on the UFO phenomenon, you may recognize that there are various elements of this tale that could be more truth than poetry. We can always hope.

Pick up your copy of “Alien Child” on Amazon here.