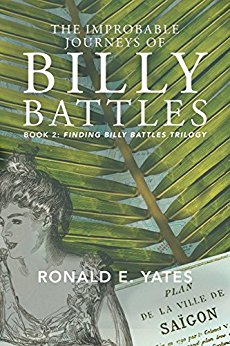 I learned so much from this well-written and meticulously researched book. I’m not usually that much of a fan of historical fiction, but in this case it was a welcome educational experience. As Billy’s journeys take him to Saigon, the Philippines, and even turn-of-the-20th-century Germany, this story is richly imbued with cultural and historical facts I previously did not know. This included something as simple as where white pepper comes from, but most especially the dark history of colonialism. I had heard of the Spanish-American War, but had no idea it was fought in the Philippines, much less why.

I have grown up simply accepting the fact that the British, French, and Spanish did a considerable amount of exploring, which also constituted conquests for more land and resources. This is apparent by the languages spoken in diverse parts of the world, far from where they originated. Getting a glimpse into the climate and attitudes of the 19th century, especially how indigenous people were trampled and exploited, brought up multiple considerations that had previously been entirely off my radar.

While colonialism’s defenders note that it brings a higher standard of living to these areas, it is also at a high price to the cultural norms and freedom of those unfortunate enough to live in such a place. Insights into Saigon in the late 1800s provided a new understanding into the Vietnam War and guerilla warfare. While in some cases, America has helped defend these countries, in others it has been just as guilty as the European conquests. Ironically, American is the prime example of a country that rebelled successfully against colonialism, yet then went on to force it on others, for example Native Americans. We are no better than anyone else and it’s easy for me to understand why other countries hate us.

The best part of this story is that all these fascinating details were woven into the plot of a story with believable characters caught up in this historical drama, from the Old West, to pre-WWI Europe, and overseas in the Far East.  I recommend it highly to anyone who enjoys a meaty, well-researched read that serves up more than an interesting story. History buffs will love it. While it is the second book in a trilogy, I thoroughly enjoyed it and had no trouble following it without the benefit of reading the first.