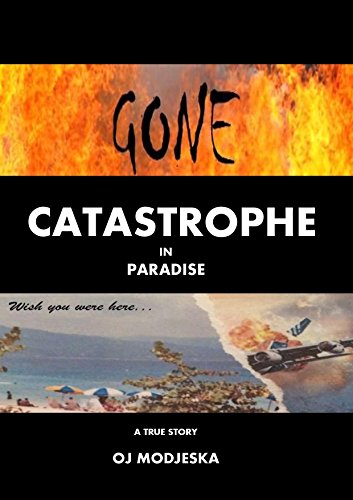 This book reminds me of the movie, “Titanic” in that you know from the start it’s not going to end well, yet up until that horrible moment, there’s nail-biting suspense as you wish that, somehow, it isn’t true and never happened. And like the Titanic, this incident is also horrifyingly true.

I blew through this gripping, yet heart rending book in a single day. I can’t name a single novel at which I’ve shed more tears. It recounts in incredible detail what went on behind the scenes of the catastrophic plane crash that occurred March 27, 1977 on Tenerife, one of the Canary Islands, when two jumbo jet Boeing 747s collided on the ground, killing 583 people.  I remember that accident well and how horrified I was that something so terrible could happen. I’d never even heard of Tenerife until that time, and unfortunately, every time I’ve heard it since, this tragedy is the first thing that comes to mind.

The author takes you, step by step, through all the events that led up to it, again showing that every disaster has multiple causes, an unfortunate chain that could have been broken at any number of points, yet never was, resulting in the unthinkable. Incredibly, it started way before that, with the placement of the airport at a horrible location where banks of fog were known to roll in from the adjacent mountains. Folklore has it that the “X” on the map was originally to indicate the place NOT to place the airport, yet later that rationale was lost, Murphy’s Law prevailed, and that was exactly where it was placed. How ironic and how human.

Having worked at NASA for over 20 years, including during the time immediately following the Challenger accident as well as when Columbia broke up over Texas skies in 2003, I’d already seen that pattern. It’s never one, single thing, one single mistake, that causes a major disaster, but an unfortunate chain that is seemingly cursed by fate.

It made my blood boil that it actually started with a terrorist attack on Las Palmas, another airport in the Canary Islands. While I’m sure there’s a special place in hell for the insidious individual perpetuating that scourge, it’s horrible the damage and loss of life their barbaric beliefs have caused. In this case, their actions of detonating a bomb in the Las Palmas terminal forced numerous aircraft to be rerouted to Los Rodeos, an airport far too small to accommodate such an influx of unexpected flights, especially wide-body, jumbo jets like the Boeing 747.

Truly, this situation was an accident waiting to happen from the start as two tower controllers near the end of their shift attempted to manage the unexpected situation with antiquated equipment; they didn’t even have ground radar. These critical circumstances were further exacerbated by cultural issues and the quirks of human nature, always a factor in such a tragedy, yet so often far from deliberate. Someone makes a bad decision, never dreaming in their worst nightmare what the result will be. And the coup de grace was the fog.

I’m not sure it would constitute a spoiler to say more, given the unfortunate end result is well known and documented. To say I enjoyed the book is a bit of a misnomer, given it was far from pleasant, yet a very emotional experience, which to me is the hallmark of an outstanding book.  This one is skillfully written and represents meticulously detailed research, which provides a three or even four dimensional view of the happenings of that day.

I’m probably not the “average reader” since I worked in shuttle and payload safety at NASA, I where I personally participated in accident investigations, had classes in such, and was involved in the post-mortem of the Columbia accident. I’ve read NTSB reports of other airline accidents with interest and had the privilege of attending Aerospace Medical Association Conferences a few times where such things were discussed, including TWA Flight 800, which went down in flames July 17, 1996 after taking off from JFK airport in New York.  Some pretty interesting theories exist related to that one, too, which were not included in the official accident report.

The author did a spectacular job of leaving no stone unturned, reporting the situations, circumstances, and results in an objective, yet thoughtful manner, demonstrating once again that accidents don’t just “happen,” at least not of this scope.

The message, of course, for us all, is to recognize that nothing in life is guaranteed. There’s no telling when what appears to be a benign decision might be the fatal link that takes a normal day into the realm of tragedy. For the human factors involved alone, this book deserves attention, especially for those who work in any industry that has the potential for a similar disaster.

I particularly appreciated mention at the end of various individuals reporting paranormal and ghostly apparitions appearing from time to time on the runway. This is the case of various locations where horrific loss of life has occurred. As a professional astrologer, upon finishing the book, I immediately cast the event chart for the accident and could see that there were definitely very sordid aspects in play at the time, all of which reflected much of what was included in the book.

Whether or not you believe in astrology, disaster charts tend to include details that fall into the category “you can’t make this stuff up.” For example, for this disaster it showed fog and unclear communications, power trips, rebellion against authority and regulations to one’s own self-undoing, death and separation from loved ones, and a tremendous amount of activity in the 8th house of death, including the asteroid Icarus, namesake of the mythological individual who tried to fly but went down in flames, on the cusp of the 8th house. It shows the compassionate action of those on the ground, and even that Tenerife would ultimately bear the stigma of being remembered for this horrific event. No, you can’t make this stuff up.

Read this book. It’s outstanding, albeit heartbreaking. And never take anything for granted again. I give this nonfiction thriller 5 stars for content, even though there were a few grammatical issues here and there. The research more than compensates.

You can pick up your copy on Amazon here.

1 thought on ““Gone: Catastrophe in Paradise” by O.J. Modjeska”