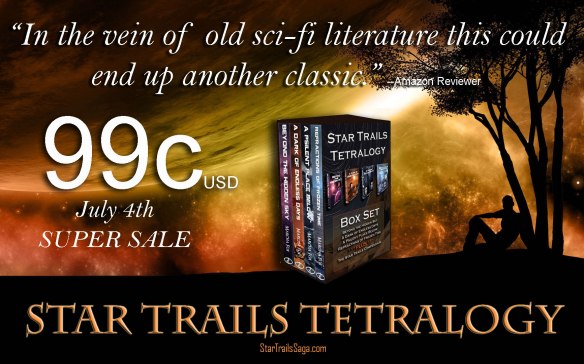 Today is your last chance to get your ecopy of the entire Star Trails Tetralogy for only 99c! The box set includes “Beyond the Hidden Sky,” “A Dark of Endless Days,” “A Psilent Place Below,” and “Refractions of Frozen Time” as well as “The Star Trails Compendium.” Descriptions of the individual books can be found below as well as at the series’ website, www.StarTrailsSaga.com.

Close families share everything.  Including consequences.  When one of the HIO’s premier terralogists refuses a job offer from a wannabe despot the chain of suspicious circumstances which quickly follow scatter his family across the galaxy.  Torn apart by space and time, will each survive long enough to be united ever again?

Volume I: BEYOND THE HIDDEN SKY

A move to another planet that goes horribly wrong.  A power hungry man’s obsession with another’s abilities.  Suspicious circumstances that scatter a family across the galaxy.  Will rescue efforts succeed or make the situation even worse?

When the Brightstar family leaves fog-shrouded and predictable Mira III for Cyraria they have no idea their comfortable lifestyle is about to end forever.  Even before the starcruiser arrives, shocking events transpire that comprise a parent’s worst nightmare.  Not only is their fourteen year old daughter, Creena, missing but it’s clear her father’s ruthless and power-hungry nemesis plans to exploit the situation to promote his own selfish ambitions. Formidable and lethal challenges await as increasingly suspicious circumstances scatter them across the galaxy.  Will they survive long enough to be together again?

“The story begins at warp speed as space travel and its theory weaves throughout the tale of a family separated by mishap and kept apart by intent.” – Editorial Review

“The author’s colorful and animated word sketches give the reader the feel of actually watching or being right in the mix of the story. She brings personality and quirks to the characters as they develop through expressive descriptions and dialogue.” – Amazon Reviewer

“I am an author as well as having taught junior high science for a number of years and think this read would be a fabulous addition to classroom libraries as well as “the hungry for sci-fi lovers” personal bookshelf.” – Amazon Reviewer

“Although geared for the YA market, it is suited for sci-fi audiences for all ages who will thoroughly enjoy the talented professional writing of Marcha Fox’s wonderful expeditions.” – Amazon Reviewer

“All her characters, even creatures on the planets, are outstanding examples of a writer totally in touch with the depths of the subconscious mind, all interacting with their roles of good and evil with hidden spiritual messages as one experiences their own individual growth of consciousness.” – Amazon Reviewer

ALL AMAZON REVIEWS OF BEYOND THE HIDDEN SKY

BEYOND THE HIDDEN SKY on GOODREADS

Opposition’s lethal temperatures are more than a simple ballome can’t withstand.  Designing and building a heat-exchanger is the only way they’ll survive.  Obtaining the needed components, however, is another story.

On a hostile planet like Cyraria terralogists are in high demand and Laren Brightstar is one of the best.  Regional governors compete for positions at the territorial level based on their economic achievements, allowing those with terraforming skills to demand a high price.  Refusing to work for those with devious intent, however, has an even higher price.  Thus the Brightstar family discovers when they’re plunged into a web of political intrigue on a planet cursed with lethal weather where survival can never be taken for granted.  Will their missing daughter return with help or will she remain trapped forever on an alien world?

“Listen to Your Inner Voice”
“UFO Lands at Hill AFB”

“Young people can identify with the children in the family, but this series is for people of all ages. Marcha does transport you to outer space, way into the future, and you will believe you are there with the Brightstar family.” – Amazon Reviewer

“In the vein of old science fiction literature this story could end up as another classic. Its original, with all the components, technology, other world and races, and a contact with Earth.” – Amazon Reviewer

“Written in a technically proficient yet engaging style this book is sure to captivate science fiction lovers of all ages!” – Amazon Reviewer

“Fox once again does an exceptional job building character and making her created universe a reality. I can’t turn a page without picturing the story in my mind and visualizing each character.” – Amazon Reviewer

ALL AMAZON REVIEWS OF A DARK OF ENDLESS DAYS

A DARK OF ENDLESS DAYS on GOODREADS

Volume III: A PSILENT PLACE BELOW

Taking refuge in the Caverns is like a dream come true.  But the dreams generated by their mysterious depths promise death or worse.  Is forewarned really forearmed?  Or another lure into the Integrator’s grasp?

Going underground to escape Cyraria’s harsh climate brings more than a few surprises besides the hospitality of an indigenous race known as the bnolar.  The caverns feel strangely like home, but shortly after their arrival prophetic visions in the form of veridical dreams alert them to upcoming danger.  Incarcerated in a territorial prison, Laren Brightstar is about to receive and refuse Augustus Troy’s final offer, after which he’ll be exiled permanently to a place from which there is no return.  Will Dirck and Win’s rescue succeed?

“The specific and very detailed description of the places and of the characters say so much about the author’s capacity to depict all of it with words, making your imagination start running freely in the process.” – Amazon Reviewer

“[The author] has created an entire world and its inhabitants along with various languages and races that each have unique abilities and qualities. Her extensive knowledge in science is evident in the explanations that are utterly believable.” – Amazon Reviewer

“A highly intelligent and prolific read, you really get a feel for the authors experience given she had a career at NASA. Speaks to the insight and depth of the book, well thought out and concise.” – Amazon Reviewer

ALL AMAZON REVIEWS OF A PSILENT PLACE BELOW

A PSILENT PLACE BELOW on GOODREADS

A discovery that links two dimensions of time.  A prison ship’s dirty little secret.  Esheron has answers but can they access them before it’s too late?

The discovery of a mineral that manipulates space and time provides the potential to reunite the Brightstar family at last.  Controlling it, however, is another matter.  With the Integrator closing in on the ability to destroy anyone for whom they have a mindprint, finding the secret of manipulating the two dimensions of time becomes a matter of life and death.  But is time their ally or another enemy?

“Author Marcha Fox has a gift for explaining the science. The detailed world she creates in the Star Trails Tetralogy is genius, so well thought out and crafted. As the Brightstar youngsters observe and understand their surroundings, their conclusions can be coloured by their Miran schooling, but when they break old habits and open their minds in order to survive this hostile planet they now call home, these children achieve the incredible. Quite Beautiful.” – Amazon Reviewer

“What sets this apart from run-of-the-mill ” space operas is Fox’s experience during her tenure at NASA. She draws upon her technical expertise and enhances it with fact-based theory that gives this as much of a ‘what-if’ perspective as you can expect within the genre. The moral and philosophical questions also give us much to reflect upon.” – Amazon Reviewer

“[The author’s] creativity and imagination never fall short but always leave me wanting more. Each character has been carefully crafted and developed. I enjoyed watching the children develop and grow from bickering teens to collaborative young adults. The final climax had me shivering as the forces of dark and light came hurtling together into an unexpected and shocking end.” – Amazon Reviewer

ALL AMAZON REVIEWS of REFRACTIONS OF FROZEN TIME

REFRACTIONS OF FROZEN TIME on GOODREADS