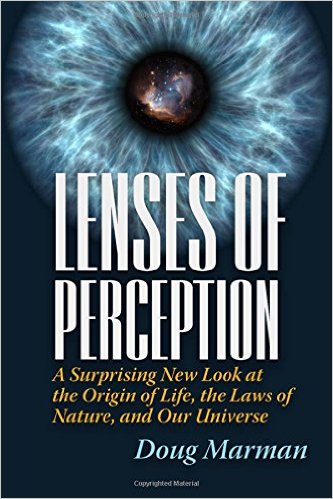 Let me start out by saying that this book has 359 references that comprise eleven pages of endnotes. If you’re not impressed by that, then this is probably not the book for you. However, if you love science and appreciate revolutionary ideas supported by considerable research that relate to an enigma no one, including Einstein, Feynman or Hawking, has been able to solve, then you would probably enjoy this book.

As a physicist and science fiction writer myself, I was fascinated by the book’s precepts. When I really get into such a tome, I become a librarian’s worst nightmare: highlighting key passages, scribbling notes in the margin and, heaven forbid, dog-earing pages. For what it’s worth, my copy sports 46 pages in that condition as well as more marginal notes and highlights than I care to count.

The premise of this fascinating book has been touched on ever since the double-slit experiment suggested some mysterious interaction existed between consciousness and physical matter. Rather than argue this, the author makes an a priori assumption that such a relationship exists. That in and of itself is not particularly remarkable, since it has been the stance of various other authors for decades. Marman, however, does not stop there. It’s not simply a matter of human consciousness influencing subatomic particles. He systematically builds a credible case for the tiniest subatomic particles possessing consciousness as well.

The author is an engineer and inventor who holds various patents and is thus experienced on the technical side, but is not a PhD physicist. This is a good thing. Stepping beyond the bounds of conventional science tends to be a career-limiting experience. Some have referred to scientific progression as occurring only via funerals, e.g., German physicist, Max Planck, who stated, “A new scientific truth does not triumph by convincing its opponents and making them see the light, but rather because its opponents eventually die, and a new generation grows up that is familiar with it.”

Marman’s theory is imaginative to the point of resembling one of Einstein’s thought experiments. While he doesn’t do the math, it goes beyond philosophizing, conjecture or excursions of fantasy. As indicated in the first sentence of this review, this book is well documented. The author states his theory then backs it up with existing scientific research.

The concept that there’s a link between quantum mechanics and consciousness has been argued by many. “The Tao of Physics”, published in 1976 by Fritjof Capra, took on this challenge, opening with Werner Heisenberg’s statement, “It is probably true quite generally that in the history of human thinking the most fruitful developments frequently take place at those points where two different lines of thought meet.  These lines may have their roots in quite different parts of human culture, in different times or different cultural environments or different religious traditions: hence if they actually meet, that is, if they are at least so much related to each other that a real interaction can take place, then one may hope that new and interesting developments may follow.”

In this case, Marman has synthesized his theory using particle physics, biology, evolution, psychology and various other disciplines. Typically, research in any of these areas is conducted strictly within the bounds of that discipline’s accepted facts, limiting the conclusions. Allowing these areas to overlap brings new possibilities as they’re viewed with, as the title suggests, new “lenses of perception.”

This typically creates an uproar from those violated by the unwelcome intrusion into their supposed domain. I’m reminded of the Alvarez Theory from back in the 80s, when it was first proposed that an asteroid collision caused the extinction of the dinosaurs. The paleontologists protested, claiming they’d died off from diseases incident to migration. Then NASA found the crater in the Gulf of Mexico, forcing paleontologists to accept it, like it or not. Professional jealousy is especially fierce when someone outside a specific field of study figures something out the oldtimers have been battling for years. Is this the case with Marman’s work? Time, as always, will tell.

The bulk of his ideas are expressed using analogies. Analogies are effective teaching tools employed by the world’s greatest teachers and philosophers. Using something a student understands as a basis, the concept can be expanded to facilitate comprehension of something new. The author leverages this approach by employing grammatical principles of first, second and third person viewpoints. For example, first person is “I”; second person brings in a relationship with another person, “you”; and third person adds others at a slightly less personal level, “they.” There are concepts individuals grasp which are expanded upon when shared with another, then ultimately coalesce when a group shares a link that binds several beings together.

A subatomic particle is assumed to have a level of consciousness which is defined as first person. It’s aware of itself and its existence. Stepping it up to the second person involves quantum entanglement, a phenomenon that’s been demonstrated, but not fully understood. In a nutshell:

If you’ve ever had a psychic connection with someone, you should understand this concept. Research by various scientists, including Dean Radin, PhD, who specializes in psychic phenomena, has indicated that these connections are instantaneous, defying the speed of light as the supposed limit of information transfer.

Getting into the third person, he discusses the relationships between groups that can be related to molecular bonding and steps into the life sciences speaking of “all for one” bonds, where certain entities will self-sacrifice for the good or even the life of the system. A plethora of explanations, examples and extrapolations build from these concepts, backed up by various references.

Marman concludes the book with an addendum that tackles the five unsolved problems of physics as they relate to his theory. I must admit that at this point I got a little lost. I only have a bachelor’s degree in physics, which was insufficient to fully grasp all the implications of some of his conclusions. By this point my brain was fried, anyway, due to the vast array of information provided on so many different levels. There was so much to absorb that it took me far longer than usual to finish reading. At times it was laborious, even painful. Perhaps if you have a PhD in physics you could blow through this book in a few days, but that was definitely not the case for me. With so many topics under discussion to establish their relationship, brevity is difficult to achieve.

This book provides interesting fodder to those with an open mind who are seeking new ideas and insights to the mystery presented by quantum mechanics. It’s unconventional, potentially groundbreaking, and defies many existing speculations. It proposes a paradigm shift to discover answers, which have so far been elusive. Just because a theory is popular doesn’t mean it’s correct. Many fade quietly into the past, unannounced. Even Einstein wasn’t correct all the time. What’s popular one year could be debunked the next. If it’s wrong, it will simply fade away, save any tidbits hanging on in old, out-dated textbooks.

Conversely, as German philosopher, Arthur Schopenhauer suggested, “All truth passes through three stages. First it is ridiculed.  Second it is violently opposed. Third it is accepted as self evident.”

The author explores history, philosophy, physics (of course), biology and various other subjects. If you’re into metaphysics, there are connections there as well. Expect to see a few things differently than you did before. If you’re a science aficionado like myself, it would make an interesting summer read. Take your time. Digest each new idea on its own merits. The title says it all. Be prepared to see the world through an entirely different lens than you did before.

You can pick up your copy on Amazon here.

[I was provided a copy of this book in exchange for a fair and unbiased review.]

For those of you who love this topic as much as I do, here are some of my favorite quotes related to physics, consciousness and the unknown:

“One is unlikely to discover what one is certain cannot possibly exist…. Whatever the field of inquiry, attempting to access a phenomenon with a methodology that is based on the firm underlying assumption that the phenomenon does not exist has proved itself to be a singularly inadequate strategy, at once self-fulfilling and self-limiting.”

“Probing inside the atom and investigating its structure, science transcended the limits of our sensory imagination.  From this point on, it could no longer rely with absolute certainty of logic and common sense…Like the mystics, physicists were now dealing with a non-sensory experience of reality…”

–Fritjof Capra in “The Tao of Physics”

“Physics tends to be dictated by fad and fashion. There are the gurus who dictate the direction in which new ideas grow.”

Some scientists (Stephen Hawking and the late Carl Sagan come to mind) insist that a “theory of everything” is just around the corner, and then we’ll essentially know it all—any day now.  It hasn’t happened and it won’t happen.  The reason is not for lack of effort or intelligence.  It’s that the very underlying worldview is flawed…We have ignored a critical component of the cosmos, shunted it out of the way because we didn’t know what to do with it.  This component is consciousness.

“You ask whether parapsychology lies within the bounds of physical law.  My feeling is that to some extent it does, but physical law itself may have to be redefined.  It may be that some effects in parapsychology are ordered-state effects of a kind not yet encompassed by physical theory.”

“Space and time exist only as constructs of the mind, as tools of perception.  Experiments in which the observer influences the outcome are easily explainable by the inter-relatedness of consciousness and the physical universe.”

“…psi may require an explicit bridge between the physical and the psychological worlds. This is why an adequate theory of psi will be … cross-disciplinary…”

4 thoughts on ““Lenses of Perception” by Doug Marman: An Interesting Summer Read for Science Aficionados”