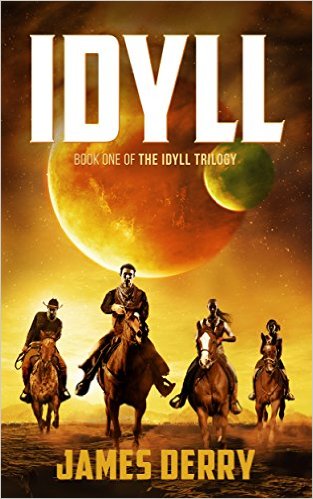 I must say that this story started out a bit slow and even got to the point I consider monotonous. However, the fact it was so well written, nicely edited and rich with beautifully rendered descriptions coupled with enough suspense to make me wonder what was going on, I kept reading and was not disappointed.

The author did an excellent job of creating a new world to which Earthlings are immigrating to escape their own as it loses viability. The colonists have agreed to live a simpler lifestyle, similar to that of the pioneers who settled the American West in the 19th century. Settling a new planet is not a simple, matter, however, with a variety of new hazards including byproducts of terraforming including a marginally sentient species known as owylls, which are predatory yet seem to act at the command of a tall, mysterious bearded man. Colonists are being afflicted by an epidemic of a malady known as “The Lullaby” which renders its victims comatose while muttering a mantra that spreads the disease to anyone who hears or perceives it, e.g. in writing.

The characters aren’t particularly endearing and I thought any emotional or romantic development between them fell flat. Nonetheless, they were interesting enough that I’d like to know more about them and why they’re the way they are. The main protagonists comprise two brothers, Walter and Samuel Starboard, who are transporting their Lullaby-afflicted mother, Alma, to Marathon, the site where their transport ship is located. Rumor has it that a cure is available there plus they also hope to find their missing father. Bear in mind that this journey is essentially a trail ride through dangerous unknown and uncharted territory which involves horses for transportation, tethered mules, and a wagon carrying Alma.

Along the way they encounter the Bridge sisters, Virginia and Miriam, who join them. There’s a considerable amount of tension between them, particularly from Miriam who is clearly a bitter, angry woman with a reputation for using men. She does prove useful helping Walt care for his comatose mother, however. Hopefully in the next volume the author will reveal more about her, whom I suspect is a very wounded soul with an interesting past beyond what was revealed in this volume. The part that really bogged down the first half of this book was their tedious journey which provided graphic descriptions of the planet and a strong sense of place yet in my opinion dragged on longer than necessary; some readers may not make it to the best part.

But once things started to move, then move they did. I don’t want to get into spoiler territory so won’t go into it other than to say all the questions that arose during the story to that point were answered and the plot, premise and details of the society of which the characters are a part was exceptionally well-developed, intriguing and enough to make me want to read the next volume of this trilogy. The irony of the title comes through amid numerous clever twists and turns, cool technology, most of which is environmentally friendly, and all sorts of other technological and societal goodies hard sci-fi fans like myself want and expect in a good read. As a former rocket scientist I’m always critical of the feasibility of the science in such novels and there was only one thing in there that seemed a bit of a stretch, so the author did well on that score as well.

World building is not an easy feat and getting all the details in place presents a challenge for any author. Derry has done an outstanding job doing so, established an interesting world with a variety of fascinating possibilities reminiscent of other sci-fi classics in print as well as film I wish I could mention but they would undoubtedly constitute spoilers.

If you like sci-fi adventure stories populated by ordinary people in an evolving off-world environment backed up by great imagery and detail, you will probably enjoy this story. It moves slowly at first (thus I only gave it 4 stars) but I admit that I stayed up way past my usual bedtime to finish it once it started to roll.

You can pick up your copy at Amazon here.