As promised last week with the Cover Reveal for Annie Douglass Lima’s latest novel, “The Collar and the Cavvarach,” now you get to learn a little bit about this fascinating and prolific author. I first “met” Annie in connection with her “Realm Explorers” website where she was kind enough to feature my science fiction world which you can see here.  This is something she graciously does for other authors who have created their own world. This spirit of sharing alone gave me a glimpse into her kind and generous nature. They say to “write what you know” and if there’s one thing Annie is certainly familiar with it’s the concept of other cultures, having lived in diverse locations around the globe. So without further ado, HERE’S Annie!

MF: Your Amazon Author Page states you spent most of your childhood in Kenya, attended college in California and now you live in Taiwan.  How did your time in each of these locations, which represent entirely different cultures, affect your outlook on life?

ADL: I know I am much more globally minded than I would be if I had spent my whole life in one country. I’m thankful for the opportunities I’ve had to travel to so many wonderful places (in addition to what you mentioned, I lived for a year in Indonesia and have been to a total of 19 countries). As a result, I see the world in terms of the whole planet with its thousands of unique cultures, not in terms of my country and everywhere else, as I think many who haven’t had the chance to travel much see it. My childhood in Kenya enriched my life and gave me a deep appreciation for the blessings I have and the fact that the best ones have nothing to do with money or possessions. My life in Taiwan (I’m going on eight years here now) has provided a wonderful balance to that, plunging me into a completely different but equally beautiful culture. It’s given me a fresh appreciation for what it’s like to be a foreigner in a foreign land (I never felt like one in Kenya), along with thankfulness for the grace and generosity of those who make foreigners welcome even when they can’t speak the language well.

MF: How does your experience with other cultures help your writing?

ADL: It came into play quite a bit when I was writing my recent fantasy novel Prince of Malorn. I love getting to know different cultures and the differences between them, and my character Prince Korram had to deal with when he traveled into Malorn’s Impassable Mountains to seek the help of the Mountain Folk. In Malorn, Mountain Folk and Lowlanders tend to distrust each other and avoid contact whenever possible, and both sides claim that the other mistreats them. I wanted to show that often, it just takes better understanding to lead to acceptance and appreciation of another culture. That, and the willingness to learn new ways of doing things and respect others’ customs even when they’re different.

I’ve brought several elements of Taiwan’s culture into The Collar and the Cavvarach. For example, some characters chew betel nut, a mild narcotic sold legally in shops decorated with flashing colored lights. When money is awarded as a prize, it’s given in a red envelope. New Year is the most important holiday of the year in both places.

MF: Was there any particular book or author whom you feel had the most influence on your work?

ADL: C.S. Lewis provided my very first literary inspiration. More recently, I’ve enjoyed the works of Anne Elisabeth Stengl. Her Tales of Goldstone Wood series is amazingly crafted. I love the way the time periods in some of the books overlap, focusing on different characters and sometimes different views of the same events. That storytelling style influenced my fantasy series, the Annals of Alasia, though not this book as much.

MF: What do you love the most about writing for Young Adults?

ADL: I’ve never specifically chosen to write for young adults. I just write the stories that come to me, and that’s been the audience that works best for them so far. Young adult novels are my favorite kind to read, so I suppose it makes sense.

MF: Which part of the creative process is your favorite?  Least favorite?

I enjoy writing new scenes when inspiration is white-hot, and it’s fun to reread them for the first time and do the first round of editing. I take no pleasure in marketing or writing my back-cover blurbs.

MF: How long does it usually take you to write one of your stories from when you get the idea to when it’s finished?

ADL: I don’t have a “usually”. Each book so far has been totally different. The longest has been eleven and a half years, the shortest nine months. The Collar and the Cavvarach took me almost exactly a year and a half.

MF: I know that most authors love all their characters, but which of your many “children” is your favorite and why?

ADL: In this book, at least, my favorite is definitely Bensin. The struggles he is forced to go through make him stronger, and I admire him for his perseverance and determination to meet his goals no matter what. He is willing to sacrifice himself for those he cares about, and while his choices aren’t always the wisest, he is committed to doing what he feels is right. Society is against him, since he’s a slave and has few rights, but that doesn’t stop him.

MF: Do you ever plan to branch out into other genres besides young adult fantasy?

ADL: It’s possible, but at this point I can’t see myself writing totally realistic fiction. Reality just doesn’t offer me enough freedom! I like to be able to make the rules. Having said that, however, The Collar and the Cavvarach isn’t really fantasy, at least not in the typical sense. It’s more of an alternate reality. If you were to step into that world, you would probably assume you were still in our own world – except for a few key details, like the prevalence of slavery.

MF: How do you feel your writing has evolved since your first novel?

ADL: I’m a much better writer now than I was then! I’ve gotten a lot better with experience, and having online critique partners has definitely helped, too. Almost every time a new beta reader goes over one of my manuscripts, I learn something new from their feedback. My writing is less wordy now, and I’ve gotten better at showing instead of telling. My characters are better developed and their dialog is more realistic. Really, I think I’ve improved in almost every area of writing.

MF: Is there a particular message inherent in your latest work?

ADL: I hope this story will make readers think about the value of human life and perhaps take a second look at some of the practices we accept or choose to turn a blind eye to in our own culture. Legalized slavery sounds so impossibly wrong that it’s easy to think we could never let it happen in this day and age, but how many other wrongs do we overlook just because it isn’t convenient to do anything about them? 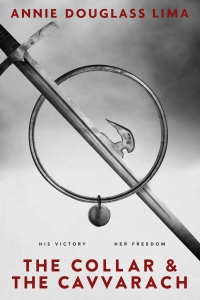 Click here to preorder The Collar and the Cavvarach from Amazon.