I have rarely encountered a book that was so intense that it was literally stressful to read but that was the case with Rhoda’s “Newborn Nazi” (posting of review to follow). Her ability to build suspense and create vivid characters is incredible. It’s even more interesting that much of her inspiration comes from real-life stories.

MF: Your family history has served as considerable inspiration for your novels. Did you do your own genealogical research or was it handed down to you?

RD: I did use ancestry.com for a considerable amount of research. On that site, I was able to find distant cousins from around the world who were able to provide me with research that had already been compiled. It was an amazing journey. With regards to Newborn Nazi, that story was based on a story that was verbally passed down. However, I do have certain memorabilia which provides proof that it is true.

MF: If you did your own research, did you have any interesting or perhaps even paranormal experiences while doing so?

RD: I was not expecting some of the things I did find. In the 1890s, one of my ancestors was in the newspaper for drunk driving of a horse and buggy. During World War I, my German ancestor (naturalized as an American citizen) had a bar fight in which he said this country was going to “hell in a hand basket”. I was able to find an FBI file on him for “Violation of the Espionage Act” because he spoke against American interests. I think one of the funniest things was to find that in the 1820s, members of my family worked for the postal industry. I currently have about six family members who either work for, or retired from the USPS. My brother’s response was, “Great. In 150 years, our family didn’t advance at all!”

As far as paranormal, I have experienced such occurrences, but none that involved my genealogical research. I have incorporated my family’s paranormal experience into a book entitled “The Creek: Where Stories of the Past Come Alive”. I am also working on a book currently entitled Zodiac Lives which is a paranormal thriller.

MF: Did you grow up with these stories being told by grandparents or at family gatherings?

RD: My German grandmother did indeed raise me with stories of interesting tales. Specifically the story that inspired Newborn Nazi.

MF: If you did your own research, was it to find story ideas or did it work the other way, that what you found inspired you to capture and develop it?

RD: I had always loved history, and because of it, I have always had an interest in my own past. Once I started writing seriously, I realized that some of those stories of the past did indeed make for good plots. Of course, I have embellished upon them. Although my family did house Jews and others to help them escape from Nazi Germany, they were not involved in any sort of spy network. But the truth is an awesome basis for a story.

MF: When you extrapolate what you know about a certain family do you ever feel as if you’re channeling as opposed to creating what occurred?

RD: I would not say “channeling” but I have certainly considered that my deceased sister has influenced me. I can hear in my head her saying things like, “You go, lil’ sis! That book is awesome”. I have even used her picture on a couple book covers and written a free short story about her, Thrice Dead. If you want to read about how many times a person can die, read that one!

MF: You certainly have a very lively genetic background which includes ancestors from Germany, Italy and Ireland. Did you notice any culture clashes growing up or did they meld together and create their own unique cultural environment? Was there any particular factor (e.g. religion) which bound them together?

RD: All three ethnicities were Catholic, and growing up that way provides some awesome material as well. I have often joked that the Irish would get drunk, the Italians would then start fights with the drunken Irish, and the Germans would sit back singing polkas and laughing at the other two for not being able to hold their alcohol. I know that sounds really stereotypical, but it made for some fun times. I miss those days. My German grandmother used to love a party… and the family joke was “It’s Tuesday night and someone sneezed. Be at Mom Mom’s house at 7pm.” Be sure to check out the “Short & Silly” posts on my blog for my Strip Club Grannies story. Then you will get an idea of how much fun I had as a kid!

MF: Do you identify with one nationality more than the others? If so, which one and why?

RD: Physically, I am the typical blue eyed blonde, big framed German woman. I didn’t really fit in physically with the rest of the Italians or Irish, that is for sure. My mother is a very strong lady who has the Italian temper. So I am a mix of the Italian temper with the German brawn— that is a dangerous combination! But I never got into any trouble because of it.

MF: What are your thoughts on the statement “Those who fail to learn from history are destined to repeat it?”

RD: Unfortunately, most people find history boring. Or in their own lives, they refuse to learn from the mistakes of others and insist on making their own mistakes. However, people need to open their eyes.

Some of the societal issues in Newborn Nazi involve giving up our freedoms for safety or economic improvements. It discusses conformity without question. As the American society evolves, we are giving up more of our personal freedoms and even thoughts. We live in a world now where if you are not politically correct, then you are evil. A racist might be a stupid bigot, but it is still his right to believe the way he does. And I have the right to believe he is a moron. But when you limit people’s right to think the way you do, then the horrors of the past are not only possible, but probable. We live in a society where a Lieutenant in the US Army died in Afghanistan after serving to protect the rights of the American people, but his wife had to fight for over a year to be able to place a Wiccan symbol on his headstone. What hypocrisy! He can die to provide freedoms, but not be entitled to those same freedoms? Only by learning from the past can we ensure our freedoms in the future.

MF: What is your favorite part of the writing process?

RD: The best part of writing is talking to people who have read and enjoyed my work. Reading the reviews is one of the most incredible feelings I have ever had. I have a friend who stopped talking to me for a month because I killed her favorite character, but she failed to realize what a huge compliment that was. She felt so connected to that character—someone I invented— that she yelled and got mad. What an incredible feeling that is for an author! To know I can use words on paper to stir people into such strong emotions!

MF: What are you currently working on and when do you hope to release it?

RD: I have three books I am currently working on:

Liam’s Longing: The McClusky Series Book 2 – This is a continuation of my historical fiction, Tower of Tears, which centers on an Irish family who immigrates to Philadelphia in 1820. The first book involved murder, betrayal, blackmail as well as a little romance. I will continue upon those themes while incorporating historical events into the series such as the Potato Famine, the Civil War, and the Industrial Revolution.

Zodiac Lives – This is a paranormal thriller where a child begins having nightmares and tells her mother of incidents and people from her former life. When her mother researches her daughter’s claims, she not only begins to believe in reincarnation, but she soon finds that she and her daughter are now targets for the Zodiac Killer of the 1960s. A serial killer who was never caught, he emerges from hiding to protect his identity.

I hope to have both of these out by January or February. Newborn Nazi’s audiobook is currently in production, and scheduled for release in January.

I also am working on “Mob Kids: Growin’ Up Philly Style” which is a novel that delves into what it was like to grow up in the families of the South Philadelphia Italian mob. No release date is schedule yet. 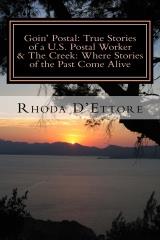 Goin’ Postal & The Creek (Where Stories of the Past Come Alive) (ebook, paperback, audiobook)

10 Shades of Blush: The Softer Side of Kink (ebook & audiobook)